Written by Andrew Gubal
Updated over a week ago

This article explains how you can mirror your tablet or PC screen to your TV using a number of different methods including an HDMI cable, Chromecast, Airplay or Miracast.

Screen mirroring: How to connect laptop to TV (using an HDMI cable)

Most modern PCs can be physically connected directly to a television. A desktop system will typically offer at least one full-sized HDMI socket, and some larger laptops do as well.

When you connect a TV to this socket, it will be automatically detected: if you already have a monitor or laptop display connected, your TV will by default be set up as a secondary display. If you’d prefer it to mirror your primary display, you can set this in Windows’ screen resolution settings – or you can simply press Win+P to bring up a quick set of Second Screen options.

If you’re using a laptop, it’s more likely to use mini-HDMI or micro-HDMI than the full-sized connector (mini-HDMI looks like a shrunk-down version of regular HDMI, while micro-HDMI is almost identical in size and shape to micro-USB). If you’re lucky, your laptop will have come with an adapter; otherwise, you’ll need to buy a mini- or micro-HDMI-to-HDMI cable.

Another possibility is mini-DisplayPort: this too can be connected to an HDMI television with the right cable, or via a simple adapter. The signals can also travel over a high-speed Thunderbolt bus, so you might be able to connect your TV to a Thunderbolt port.

HDMI and DisplayPort connections can carry sound as well as vision, so a single cable should do everything you need – but you may need to manually switch audio devices to get audio to play through your TV. You can do this by right-clicking on the volume icon in the Windows system tray, selecting Playback Devices from the pop-up menu, selecting the appropriate device and clicking Set Default.

Google’s Chromecast plugs into the back of your TV and mirrors web pages from the Chrome web browser, using your home wireless network to connect to a laptop or mobile device running the browser. 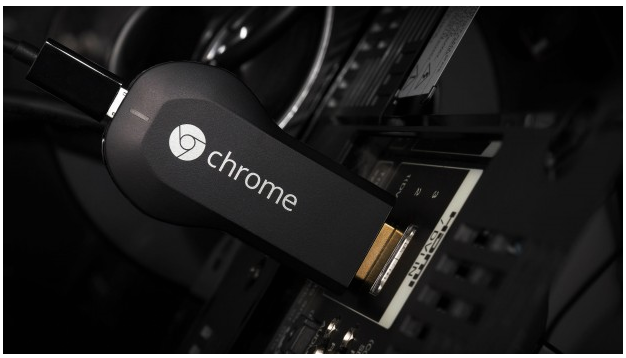 How to connect a PC to a TV (via Miracast)

Since 2013, the Wi-Fi Alliance has rolled out the Miracast wireless display standard, using peer-to-peer Wi-Fi Direct to enable point-to-point connections between devices without the use of a router.

Miracast devices allow streaming of up to 1080p video and 5.1 surround sound, and the connection is secured using WPA2 encryption. Content is streamed directly through your device, meaning Miracast devices – unlike Google’s Chromecast – don’t need an external internet connection. Think of it as HDMI over Wi-Fi.

Sounds great, but how do you use it? Well, for starters you’ll need your devices to support Miracast. This shouldn’t be a problem with newer devices but older devices may need to use a Miracast adapter, which can be plugged into HDMI and USB ports.

In terms of operating system, you will need to have Windows 8.1, Windows Phone 8.1, Android 4.4, BlackBerry 10.2.1 or greater. OS X and iOS do not work with Miracast, as Apple uses its own AirPlay technology. On the receiving end, most TVs released over the past few years will have inbuilt Miracast support.  If your TV is older than this, so you’ll need to buy a Miracast dongle, such as Microsoft's Wireless Display Adapter or Asus's Miracast Wireless Display Dongle. Buying an adapter that matches the make of your phone, laptop or tablet is a good choice, but the Miracast connection should work across devices regardless of brand.

How to connect Mac or iPad to TV (via AirPlay)

If you’re using a Mac dated 2011 or later, Apple’s proprietary AirPlay system lets you mirror your display wirelessly onto a TV. It’s a terrifically simple system – when mirroring is available, the AirPlay icon appears on the menu bar (a square with a triangle pointing into it); click on it to open a dropdown menu that shows the option to enable or disable mirroring. AirPlay lets you use your TV as a secondary display, so you can play videos on it at its native resolution, while keeping your MacBook or iMac’s display for desktop applications.

The catch is that AirPlay requires an Apple TV box connected to your television (it’s detecting this box that tells OS X to show the icon). Still, AirPlay is a supremely simple system, and while there’s still a small amount of visible lag, the mirrored display feels more responsive than WiDi. AirPlay also has the advantage of working with the iPhone, iPad and iPod touch.

If your computer doesn’t have any of these ports, you still have options. Many TVs offer a regular 15-pin VGA socket, so if your laptop or desktop has an analogue VGA connector, you can use this to hook it up.

It may also be possible to use a DVI connection. If your PC has a DVI-I socket, you can use a simple DVI-to-VGA adapter to connect it to a 15-pin socket on the TV.

If it’s a DVI-D socket, however, that means it’s digital-only, and your only option is to use a DVI-to-HDMI adapter cable to plug it into an HDMI socket. This may sound more convenient than using VGA.

You can tell what sort of DVI socket your computer has by looking at the long, flat aperture at the left-hand side of the port: if it’s surrounded by four pinholes in a square configuration, it’s DVI-I. If the flat hole is stuck out on its own, with no other holes around it, it’s DVI-D.

Did this answer your question?